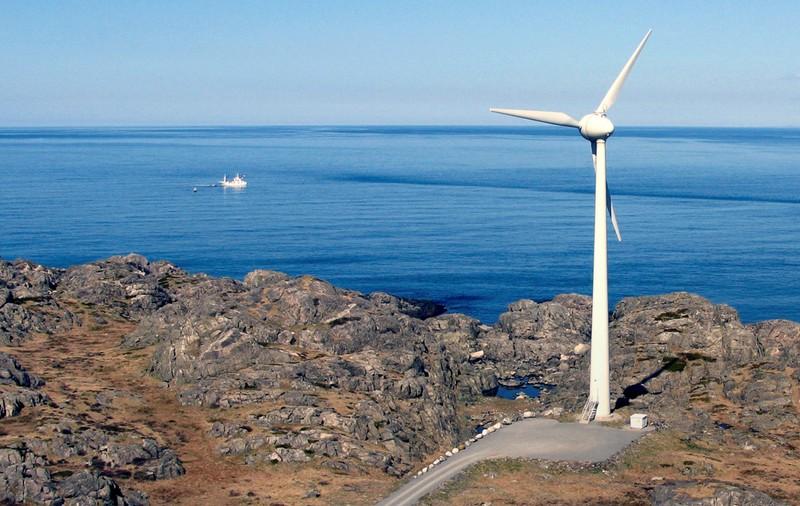 FILE PHOTO: A windmill sits next to the ocean in Utsira, a North Sea island just 6 square kilometers and houses 210 people who already receive most of their power from two onshore windmills, in this photo taken in April 22, 2008. REUTERS / Wojciech Moskwa / Stock Photo

OSLO, Norway (Reuters) – Norwegian energy regulator NVE has identified 13 areas considered most suitable for the development of new wind farms onshore, mainly in the south, it said on Monday.

Investments in wind power are growing in Norway as development costs fall, with about 1.8 gigawatt (GW) of capacity under construction to add to its 1.7 GW farms.

The 13 areas contain 16,705 square kilometers (6,449.84 square miles) of recommended land and were selected from a total of 43 zones being considered, the Water Resources and Energy Administration (NVE) said in a proposal to the Ministry of Petroleum and Energy.

"These areas are pointed out by weighing the conditions of production and network capacity against the effects on the environment and society," said ΝVE.

While the NVE analysis showed that many areas in northern Norway had better conditions for wind power, most of the designated areas were in the south due to the network's limited capacity in the north and the large areas used by reindeer herders.

Many of the native Sami of Norway oppose wind farms, as construction work and project roads can destroy or degrade lands traditionally used by reindeer.

By identifying preferred areas for wind power, the NVA hopes to streamline the approval process, although the projects still need to be evaluated individually, according to the document.

By the end of 2018, there were 610 operational wind turbines in Norway spread across 35 different power plants. These have a total installed capacity of 1695 megawatts and, in a normal year, will have a total production of 5.3 terawatts-hour (TWh).

In comparison, Norway's hydroelectric power, by far the largest source of electricity in the country, produces about 136 TWh of energy in a normal year, which corresponds to 94% of Norway's energy output.