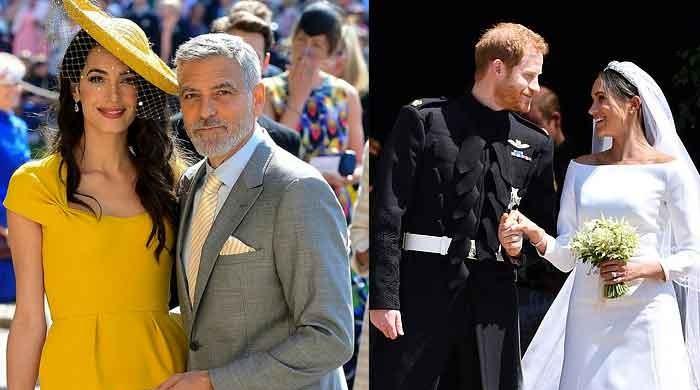 Hollywood star George Clooney and human rights lawyer Amal Clooney claimed they did not know the bride and groom at the wedding of Prince Harry and Meghan Markle.

Actor George, 59, and his wife Amal, 42, revealed that they did not know the Duke and Duchess of Sussex moments before the royal wedding.

The wedding ceremony of Prince Harry and Meghan Markle was attended by many A-list stars, celebrities and elites.

Some of these huge stars were not exactly close friends of the bride. As in the case of George and Amal Clooney, who told the wedding guests that they didn’t even know Harry and Meghan.

Both celebrities were among 600 guests who witnessed Prince Harry, 36, and Meghan Markle, 39, exchange vows at St. George’s Chapel, Windsor Castle in May 2018.

However, the Clooneys told other guests that they did not know the happy couple, according to Rachel Johnson.

“There is a story circulating that while Carolyn Bartholomew, Diana’s former roommate, waited for the wedding ceremony to begin, she turned to the couple next to her and asked how they met Harry or Meghan,” wrote Johnson in the publication AirMail online. ” We don’t, ‘replied the Clooneys cheerfully.’

Carolyn, who attended the wedding with her husband William, is Harry’s godmother and one of three young women who shared Diana’s apartment at Earl’s Court and knew the secret when she met Charles.